The Cal Arte Ensemble led by Tamami Honma will perform two of Bach's most popular works - the Brandenburg Concertos Nos. 3 & 5, the Concerto for Two Tumpets by Francesco Manfredini, and a selection from Handel's Messiah that will include the famous Hallelujah chorus.

The Brandenburg Concertos are some of JS Bach's most well-known and enduring works, and are considered to be among the finest examples of Baroque music. Remarkably, he wrote them as part of a job application for Christian Ludwig, Margrave of Brandenburg-Schwedt, younger brother of the King. Bach was the Kapellmeister in the small town of Cöthen and sought to elevate his status by working for His Royal Highness. Alas, it seems the Margrave didn't even bother to look at the works let alone have them performed and Bach did not get the job. The manuscripts of the concertos were later unearthed by Bach's son, Carl Philipp Emanuel Bach, in the Margrave's library after his father's death. They were eventually published in the early 19th century and have since become some of Bach's most famous and celebrated works. The Brandenburg Concertos are a diverse and innovative set of works that showcase Bach's genius as a composer and his creativity in using different instrumental combinations.

The Concerto for Two Trumpets by Francesco Manfredini was composed aroung 1711, a time when the trumpet was still a relatively new and unfamiliar instrument in the world of classical music. The trumpet was originally used in military and ceremonial contexts, and had not been widely used in orchestras. The concerto is a lively and energetic work that showcases the technical abilities of the trumpet players and the virtuosity of the Baroque style.

Handel's Messiah is one of the most popular and well-known works of choral music, and it is performed by choruses and orchestras around the world during the Christmas season. Divided into three parts - the Nativity, the Passion, and the Resurrection - the entire work was composed in just 24 days. Handel reportedly worked on the oratorio day and night, fueled by caffeine and inspiration creating one of our most beloved masterpieces of classical music.

Tamami Honma will be appearing with the Mission Chamber Orchestra in a program of Portuguese music featuring works by João Domingos Bomtempo, who was a contemporay of Beethoven, and Joly Braga Santos. The concert will be at Five Wounds Portuguese National Church at 1375 E Santa Clara St, San Jose, CA 95116. Free admission. 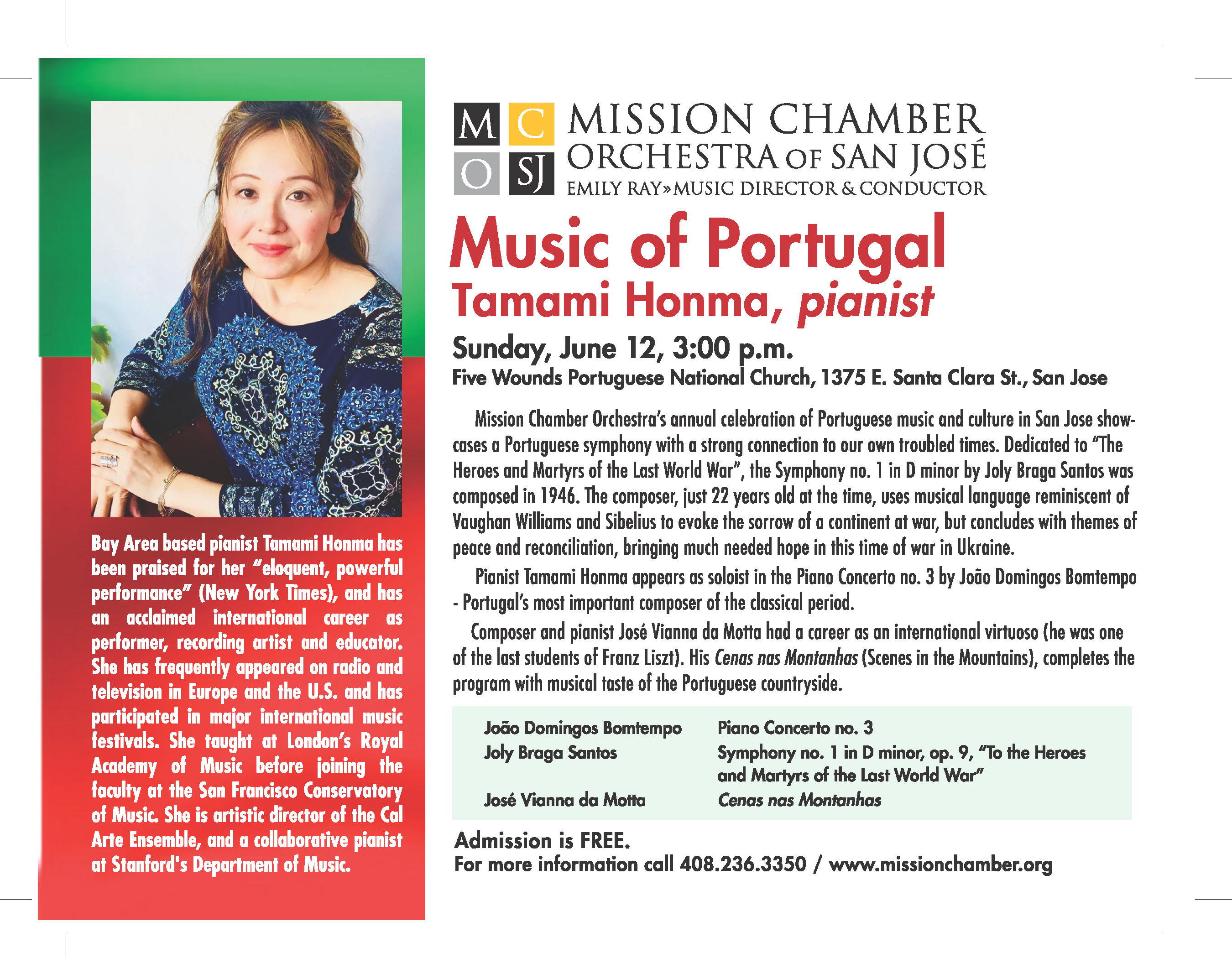 In support of the people of Ukraine 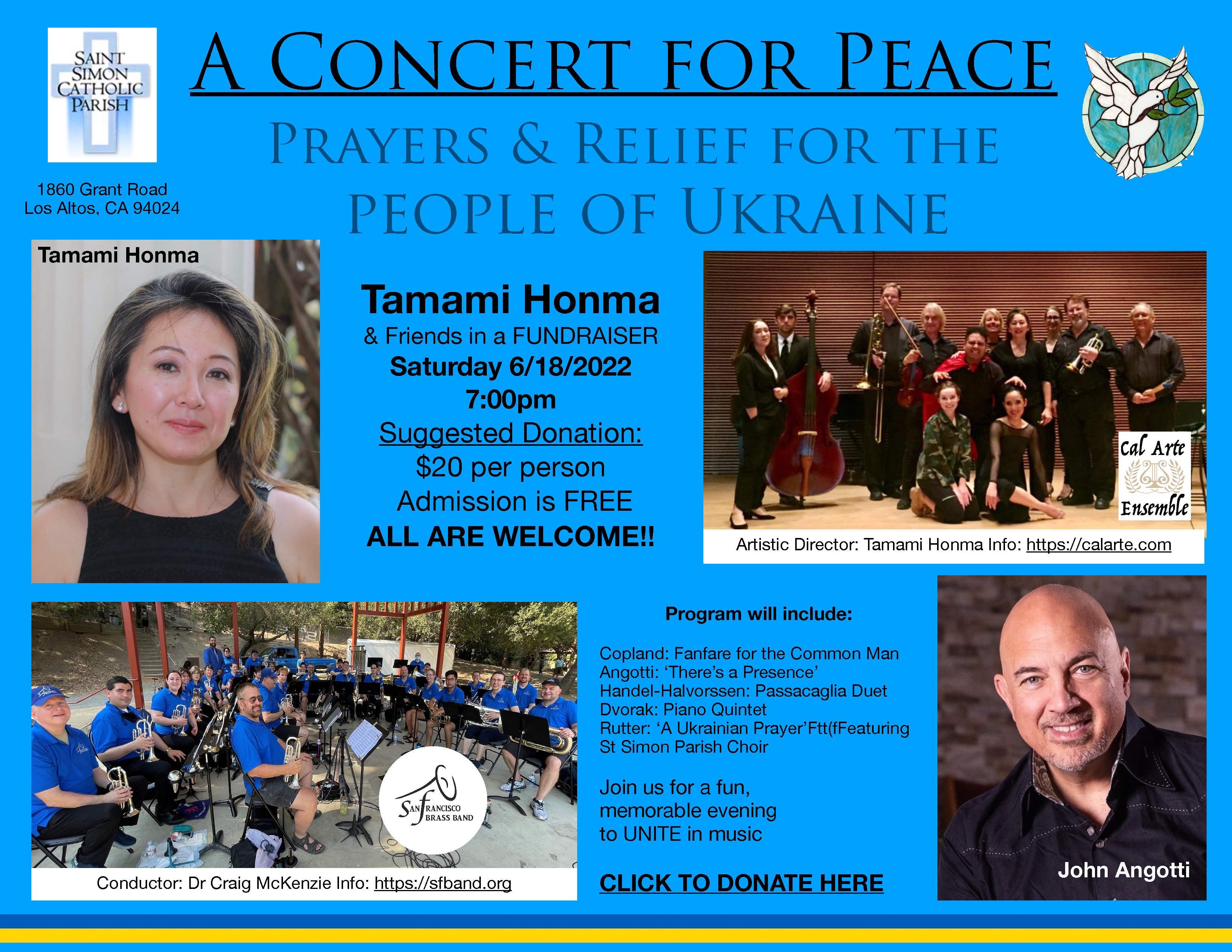 For the last two years, Tamami Honma has been recording a spellbinding new version of the complete 35 Beethoven Piano Sonatas. Based on the critical edition of Beethoven's scores edited by musicologist and renowned Beethoven specialist, Dr Barry Cooper, these recordings will include the much neglected first three sonatas Beethoven wrote in his youth and incorporate thousands of corrections revealed by Dr Cooper's meticulous research. These recordings will set a new standard in respecting Beethoven's intentions.

Like many other music organizations, our ability to put on live concerts was badly affected by the Covid pandemic. During 2020 and 2021, we worked on several virtual productions - collaborations with the San Jose Symphonic Choir featuring complete performances of Vivaldi's Gloria and Fauré's Requiem. Our most recent production was a virtual realization of their summer concert tour program that includes a diverse range of popular a capella choral works: Rachmaninoff's Bogoroditse Devo, Palestrina's Sicut Cervus, Hard Times, Battle Hymn of the Republic, Henry Mollicone's Hear Me Redeemer, the and the gospel-infused Keep Your Lamps and Ride The Chariot.

On December 6, 2020 the Cal Arte Ensemble appeared at the Five Wounds Portuguese National Church in San Jose playing classical works by leading Portuguese composers from the Renaissance to the modern era. The concert was livestreamed here and featured chamber works by leading Portugues composers including the Harpischord Concerto in A by Carlos Seixas, Piano Quintet in E flat by João Domingos Bomtempo, and String Quartet No. 2 by Joly Braga Santos. The concert was sponsored by the Instituto de Camões, Lisbon, Portugal.

Cal Arte's concert with San Jose Symphonic Choir in March 2020 was to have featured works by Mozart, Beethoven and Hummel. Following the outbreak of the Covid pandemic, the concert had to be cancelled but in its place, we created a virtual performance of Beethoven's little known gem, Opferlied Op 121b, performed here by members of SJSC and Cal Arte each recording themselves at home. Some of the video of choristers was captured during zoom sessions so looks a little crude, but bear in mind this was one the first virtual videos to come out during the pandemic and captured a complete work, one that is rarely peformed.

My Spirit Be Joyful

In another virtual performance, see our "furry companions" edition of this famous work by Bach. 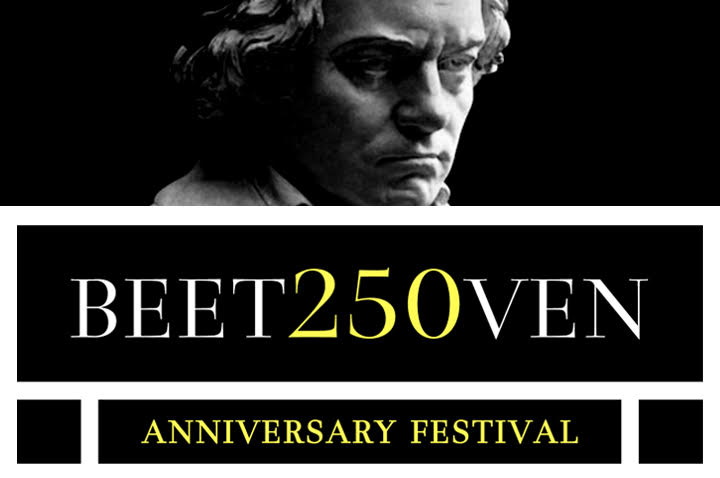 A special 3-hour concert with movements from piano sonatas, arias, and short instrumental works performed by some of the Bay Area’s leading performers. More details here. 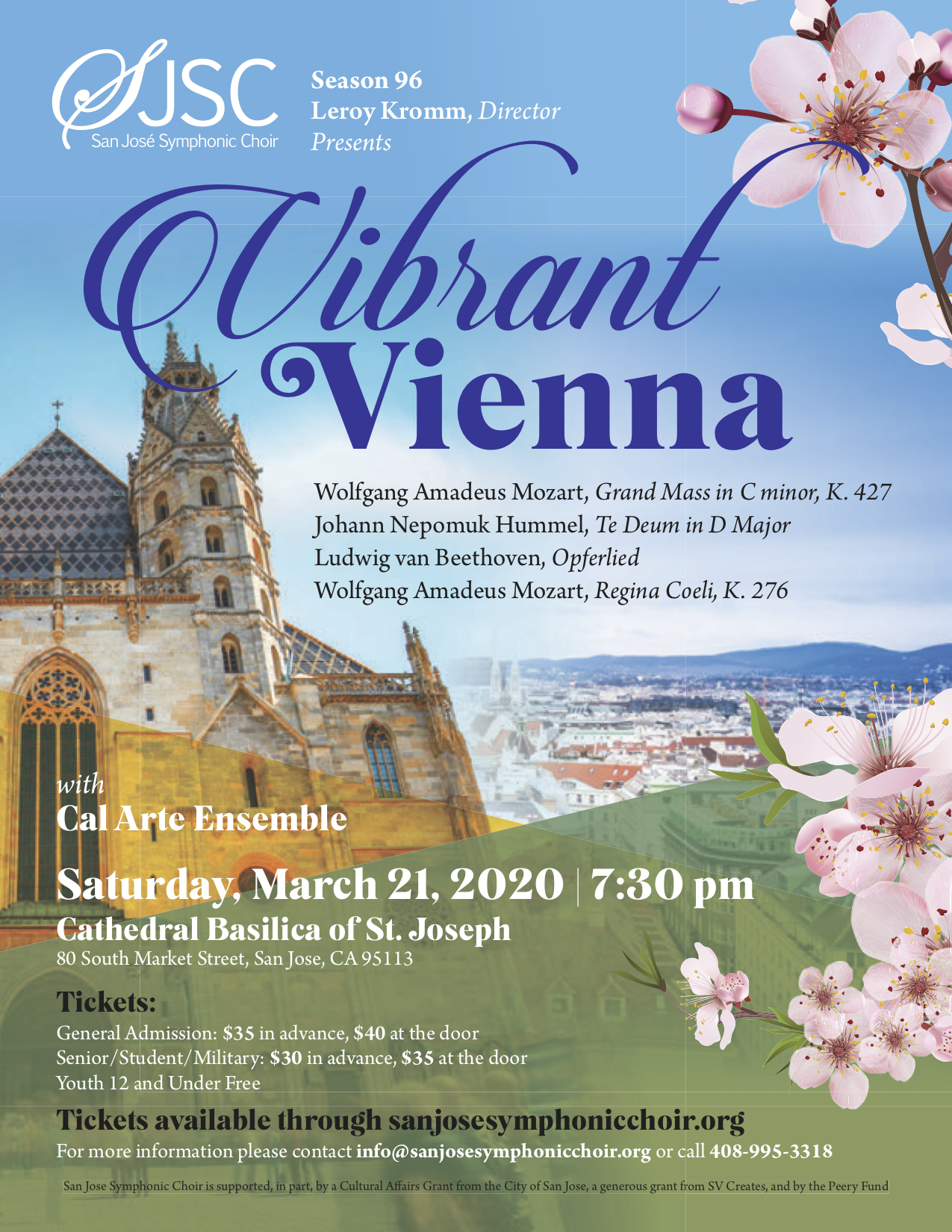 Following the highly successful collaboration of Cal Arte with the San Jose Symphonic Choir last year, we present an exciting new concert for 2020 with choral masterpieces by Mozart, Beethoven, and Hummel.

Young People's Recital: A fundraiser for the homeless

At 7pm Saturday, February 22, the Cal Arte Music Foundation, in conjunction with the Prince of Peace Church, will present a recital of performances by the piano students of Tamami Honma. The recital will feature short student presentations including excepts from Dvorak's Dumky Trio, Beethoven's Hammerklavier Sonata, and movie anime music. For younger students it will be their very first recital experience while for others it will be the precursor to competition level performances. Come support their efforts to raise funds for a good cause run by the Prince of Peace Church in Saratoga (12770 Saratoga Ave, CA 95070). Cal Arte Music Foundation is sponsoring this concert to foster the musical experiences of the younger generation. 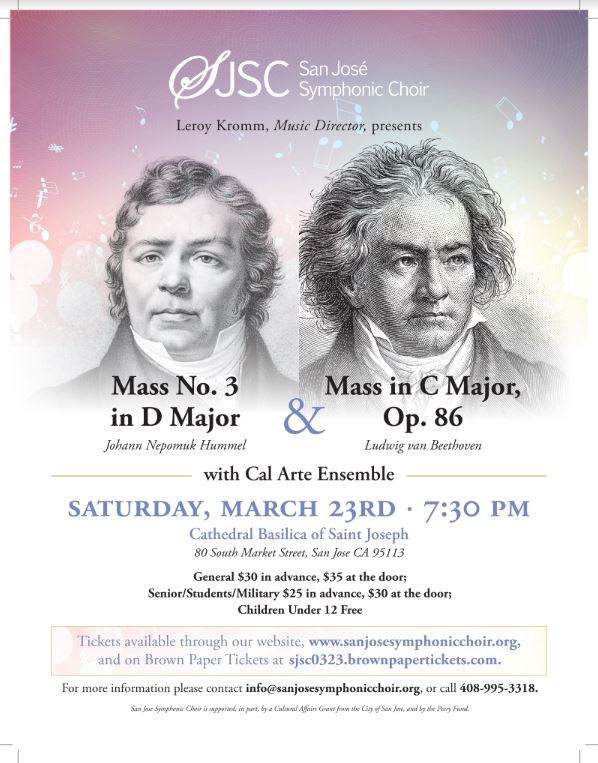 Beethoven Mass in C and Hummel Mass in D


Hummel (1778-1837) is much less known today than Beethoven (1770-1827), but in their day they were both well known, as well as being friends and rivals. Hummel, like Beethoven, was a piano virtuoso, although his self-confidence was said to have been shattered by Beethoven's arrival in Vienna where both composers spent most of their lives. Hummel, nevertheless, eventually succeeded Joseph Haydn in the role of Kapellmeister in the court of Prince Nikolaus Esterházy II, after Haydn's death in 1809. Two years earlier Esterházy commissioned Beethoven to write a Mass for his wife - the Mass in C. Hummel subsequently wrote his Mass in D a year later. In this concert, SJSC has paired the two masses, allowing comparison of the styles and gifts of these two important classical contemporaries. 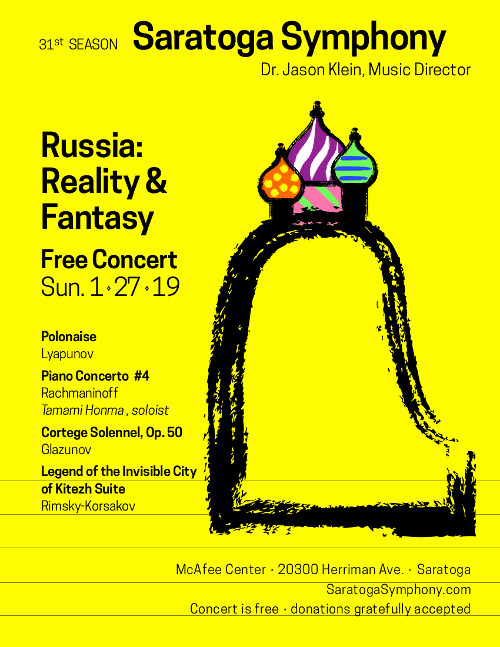 
In a rare performance of Rachmaninoff's fourth and last piano concerto, we get to hear the composer operating in a new more jazzy and experimental style. Partly because the work was quite different from the much more famous second and third concertos, audiences were slow to appreciate it. Rachmaninoff felt obliged to revise the concerto several times over many years significantly cutting it in length. Modern thinking suggests Rachmaninoff may have overcompensated with the later versions. This performance will feature one of the early versions, itself a rarity among rarities, as when this work does infrequently get an outing, players often opt for the shortened and perhaps less satisfying final version.


When Schumann wrote his Piano Quintet in E flat the idea of combining a string quartet with piano was new. With this magnificent composition, considered to be one of the finest musical works of the 19th century, Schumann opened the way for a whole new genre of chamber music. Edward Elgar's Piano Quintet, written in 1918 at the end of the Great War came just a year before his famous cello concerto. It is a similarly powerful and expansive work and widely considered to be one of the composer’s finest chamber works. 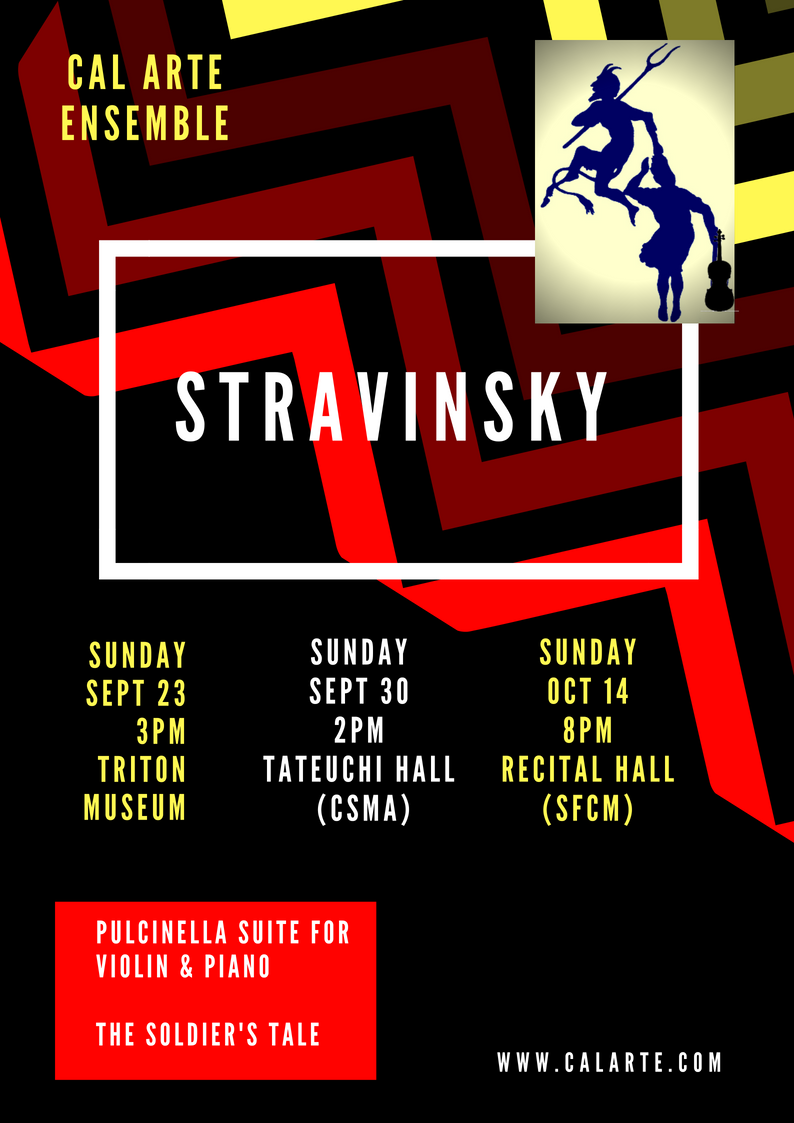 The Soldier's Tale by Igor Stravinsky

Tickets: The performances are all free admission with a suggested donation of $20. Space is limited so please reserve your seat by booking on the appropriate link above.

The Cal Arte Ensemble presents L'Histoire du soldat (The Soldier's Tale) featuring a full cast of narrator, actors, dancer and musicians in this major work by Russian composer Igor Stravinsky and his literary collaborator Swiss writer C. F. Ramuz based on a Russian folk tale, The Runaway Soldier and the Devil. In a modern twist on convention, the performance of the soldier will be played by a woman, singer-actor Katie Ahman, a two-time National YoungArts Winner.

The musical performance tells the story of a wayward soldier, who while on leave makes a Faustian bargain exchanging her violin (and soul) with the devil for a book that predicts the future. While the book makes the soldier immensely wealthy, it comes at great cost to her relationships with friends and family. In the hopes of making a new life she pursues a chance at winning the hand of a sleeping princess (Dian Meechai). The devil (Khris Sanchez), though, seemingly outplayed for a while eventually thwarts her plans.

The music has the unmistakable rhythmic and tuneful dazzle of Stravinsky featuring a lively concoction of jazzy figures, dance forms and marches for a small group of players. Besides narrator, and actors playing soldier, princess and the devil, the music will be performed by a seven-piece ensemble of musicians conducted by Cal Arte's artistic director Tamami Honma.

As an appetizer to each performance, Ms. Honma will be playing the piano with Cal Arte’s resident violinist and co-director, Julian Brown in Stravinsky's neoclassical Suite Italienne for violin and piano, a work based on the ballet Pulcinella which in turn was based on the delightfully ear catching melodies of 18th century Italian composer Giovanni Pergolesi.

The performance will include a complimentary wine reception. 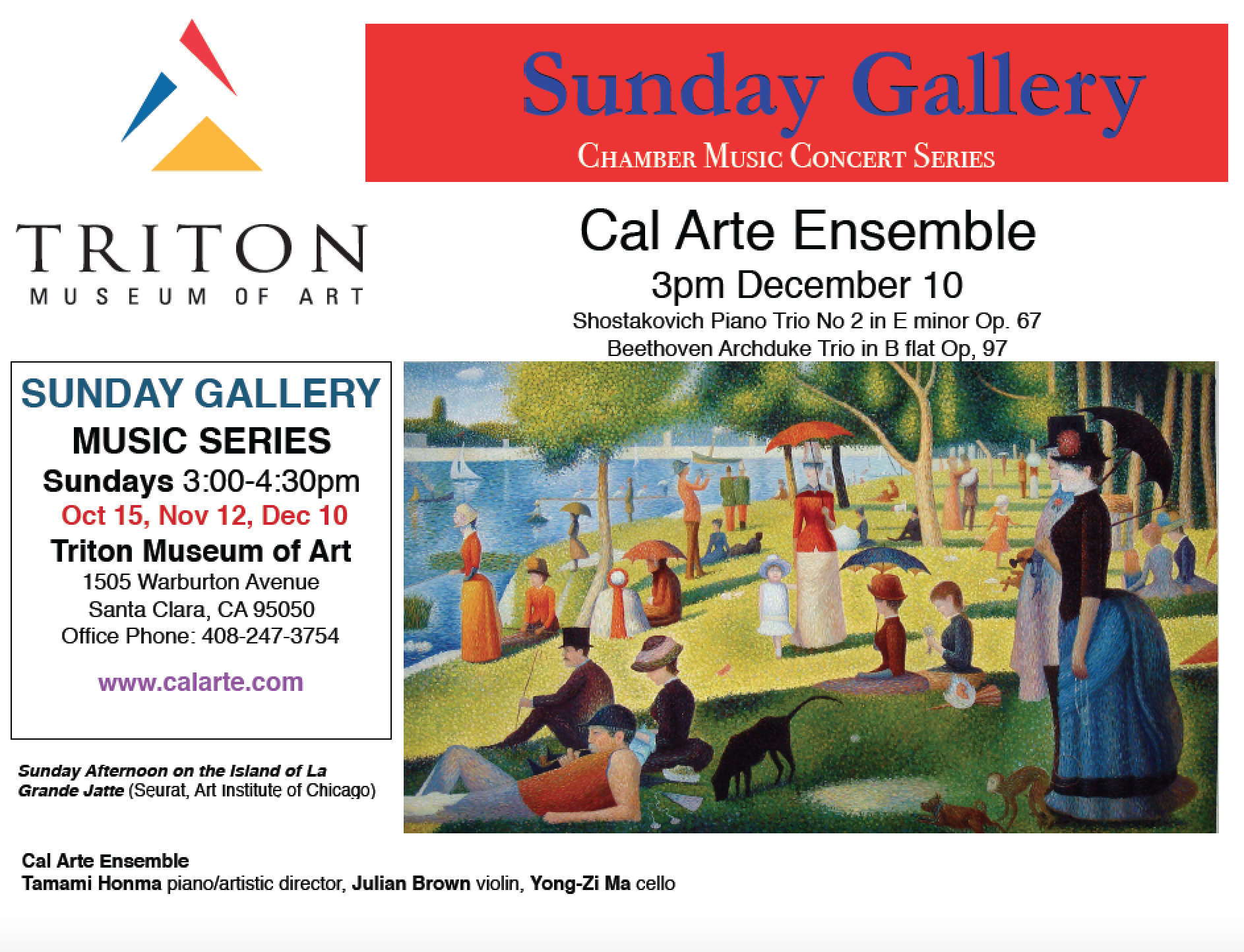 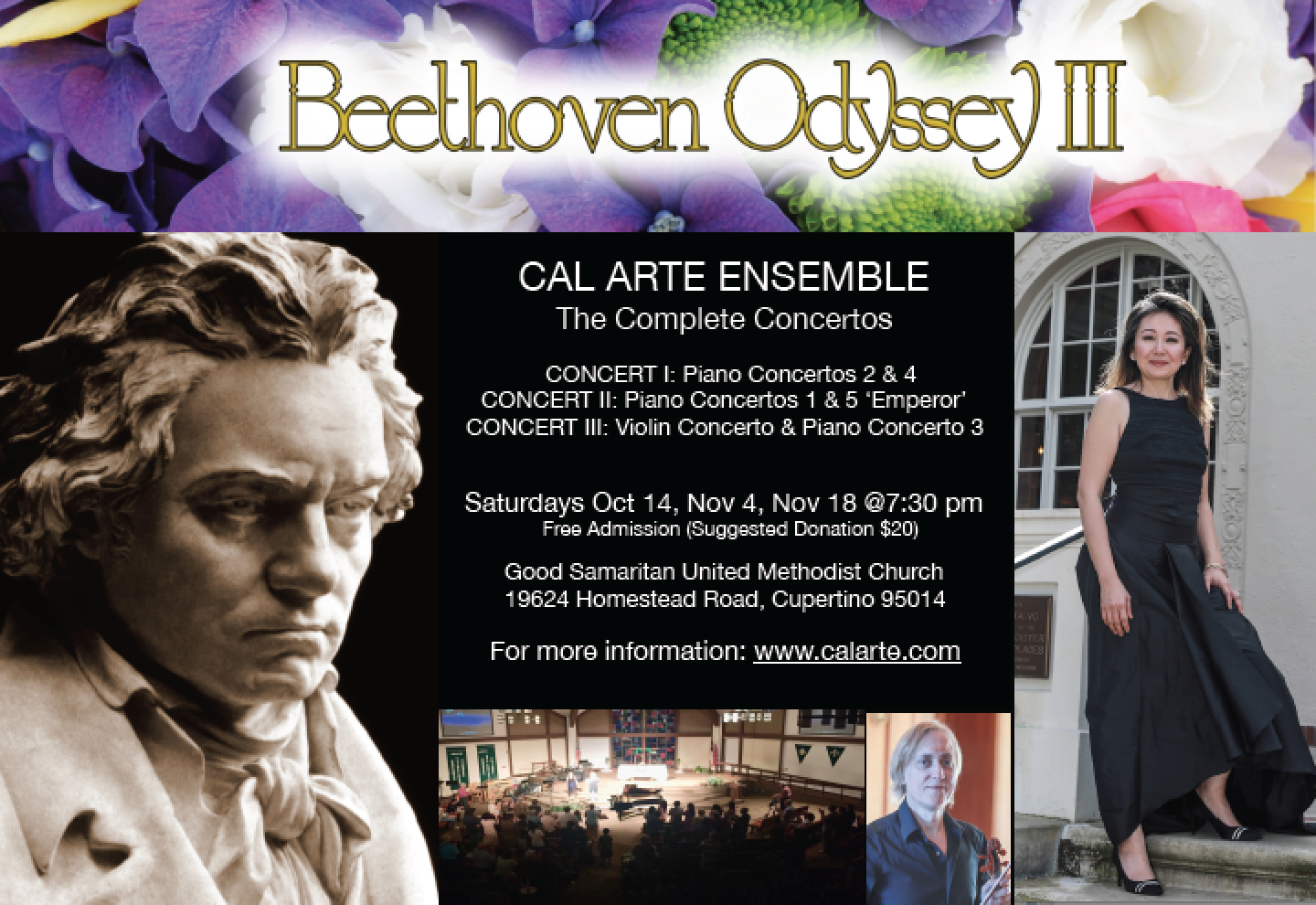 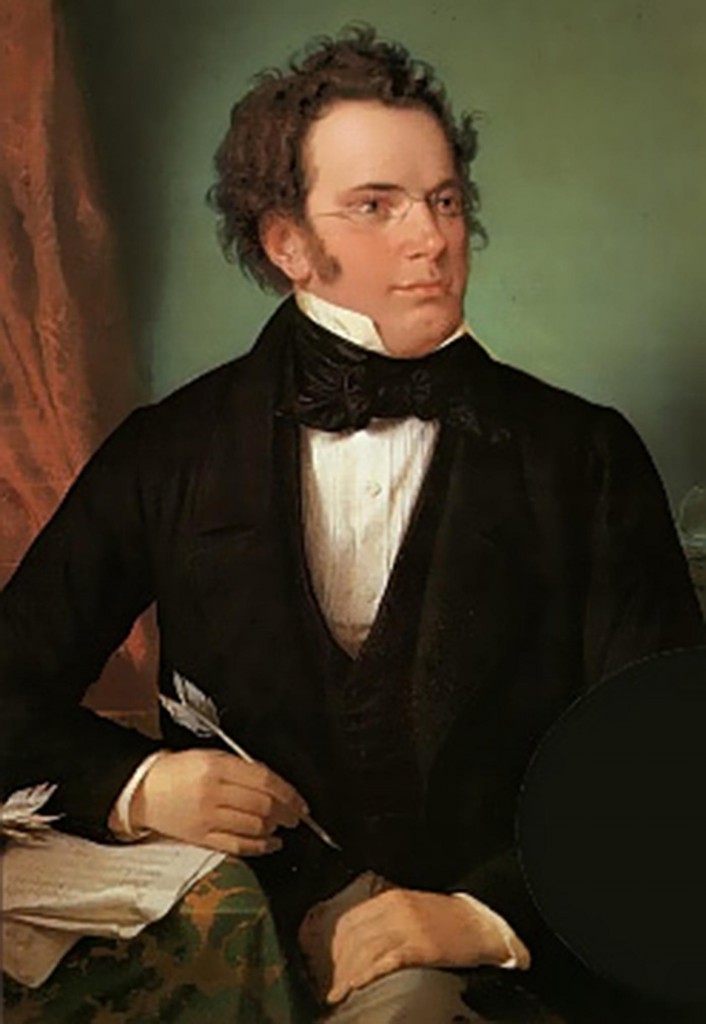 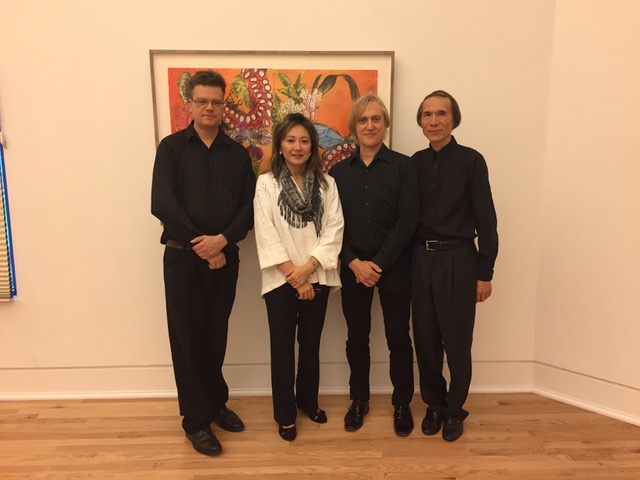 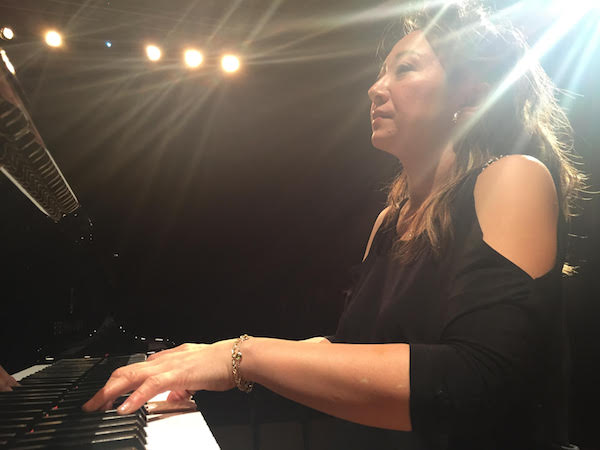 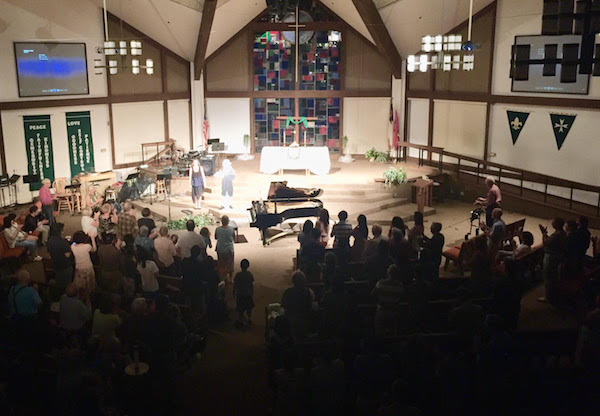 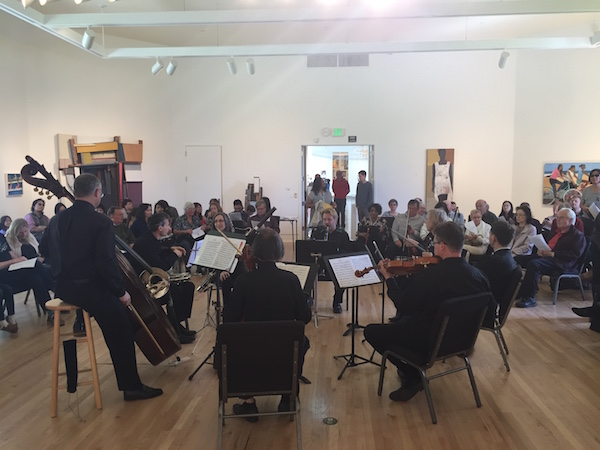 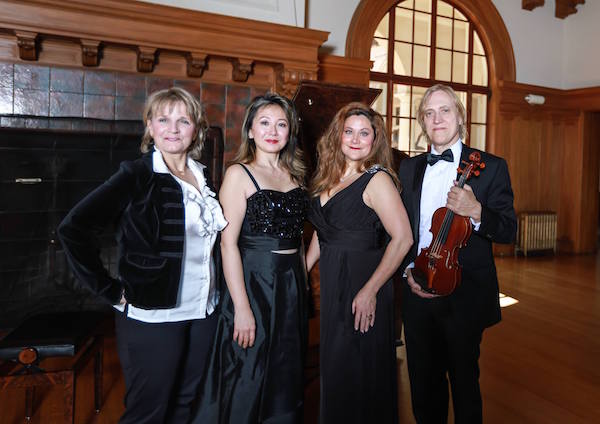 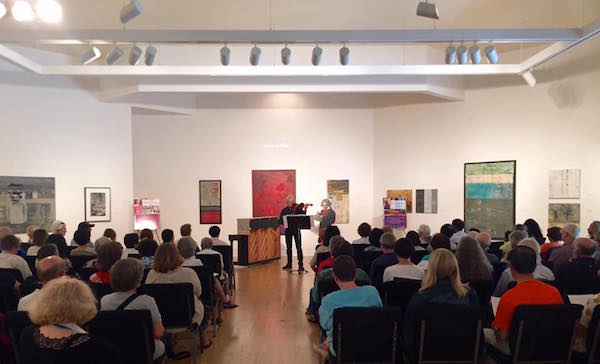 Cal Arte is the Triton Museum of Art's ensemble-in-residence, putting on its popular Sunday Gallery chamber concerts within the gallery's beautiful spaces. To make this possible, donations at Cal Arte's concerts were used to purchase a piano hosted at Triton. The concerts have attracted large, often capacity audiences, and have helped increase foot traffic into this secluded gem of a museum.

Cal Arte regularly perform at venues across the South Bay including the Triton Museum of Art, St Andrew's Episcopal Church in Saratoga, the Ladera Community Church in Portola Valley, and the United Methodist Church in Cupertino. 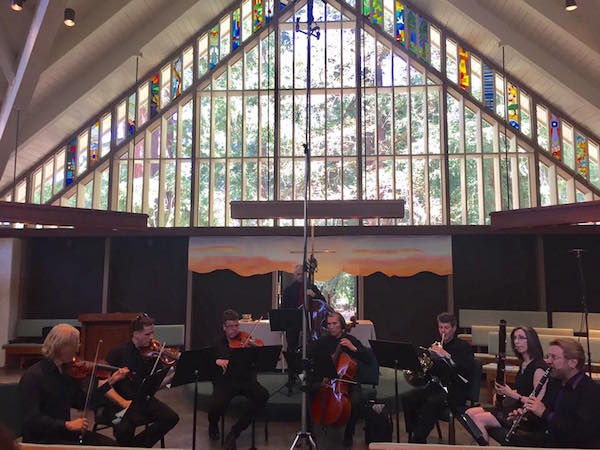 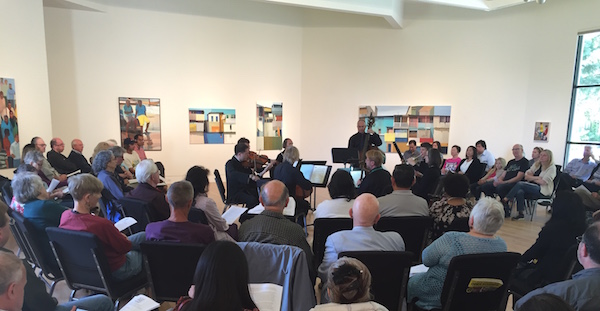 Cal Arte's objective is to bring great chamber music to a wider audience especially in areas where people may not have access to a wide diversity of classical music. The Cal Arte Music Foundation is a 501(c)(3) registered charity so please consider making a tax-deductible donation. Your support will go toward continuing our mission in putting on more programs and reaching out to the community. 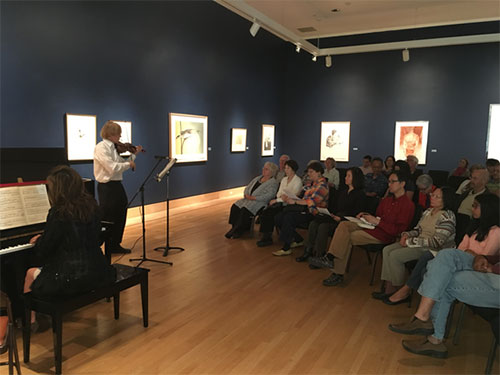 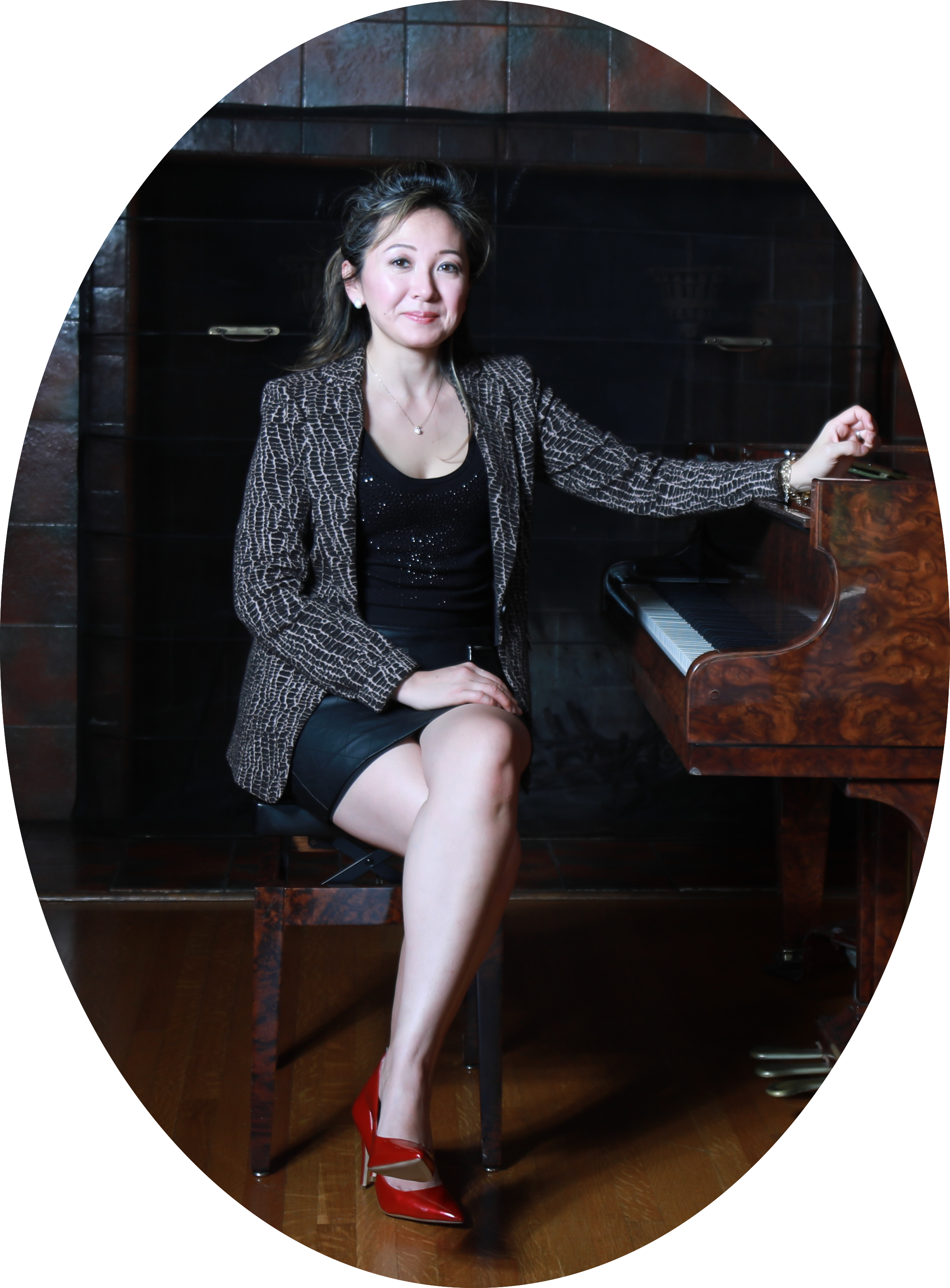 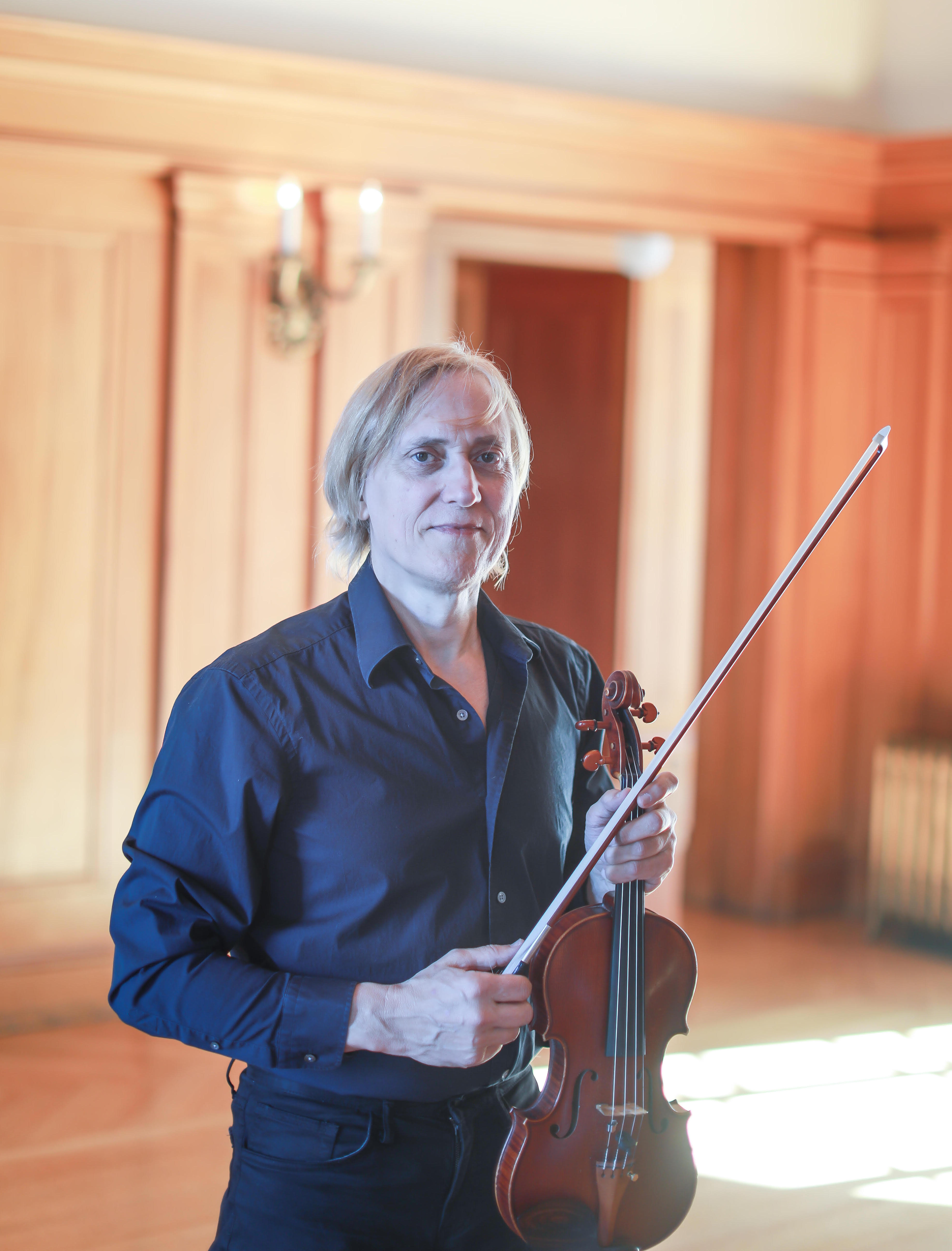 Your tax-deductible gift helps to make our concerts possible

Support Cal Arte if you shop online at Amazon
(0.5% of eligible purchases at no extra cost to you)